On Judges and Justice

I heard Sandra Day O'Connor say last night that supreme court judges can't afford to question their judgment once they've made a decision on the constitutional critical mass of a law. She said, in fact, that her personal policy in 26 years on the U.S. Supreme Court was to express her opinion and move on. No looking back, she said. No second guessing. Ever. Otherwise, I suppose, you'd never sleep. Poor, poor members of the California Supreme Court. Today, those judges were forced to look back over their shoulders - a long gaze across a $40-million church-funded campaign machine, and 7-million November votes that said, "You got it wrong when you overturned our ban on same sex marriage, judges. We don't like 'em." Those 7-million folks fear allowing same sex marriage will destroy "traditional" marriages in California... which we know makes as much sense as my blaming a bulging belly on the grocery store in my neighborhood that's allowed to stock Ben and Jerry's ice cream. But the judges in California aren't considering what makes sense today. They aren't even considering whether or not the rights of same sex couples are being violated. They seem to be focused on the unalienable right of Californians to gather forces and change the constitution with a majority-rules vote. The votes of 7-million Californians last November upended a 5-month old Supreme Court ruling that allowed same sex marriage on the sound basis of liberty and justice for all. That means twenty percent of the population of the Golden State changed the constitution for the other 80%. Marriage, in California, is now defined by the constitution as being a union between a man and a woman. And it looks like the supreme court judges - on second thought - may agree. "You can present your own initiative to the voters," said Justice Joyce Kennard today to proponents of equal access to the right to marry. Some have rewound California's constitutional proposition history to 1964, when the same majority-rules vote overturned a law that had made it illegal for property owners to refuse to rent or sell to people because of their race. With a 65% margin of victory, Californians re-legalized racial discrimination that year. The vote was reversed by the the state's supreme court two years later. Mobocracy. It's fickle and nurtures decision-making ruled by passion, not reason. It sounds like a good thing for those of us who are passionate, but really it's like letting your children gang up on you and make the rules for bedtime. Supreme court. It should be the fail safe button on mobocracy. It should be the place where a majority is told, no...you may not take away the rights of a minority. It's the voice saying, "Because I'm the mom, that's why." We'll know what the judges think it looks like in the rear view mirror sometime in the next 90 days. 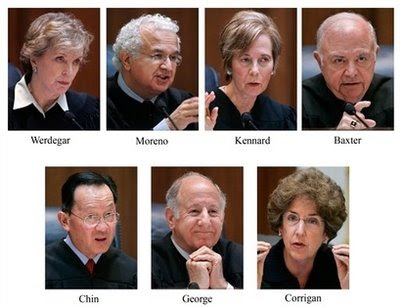 I hope they choose a good night's sleep. Peace.
Posted by mamadelapaz at 8:20 PM

In the same interview Judge O'Connor pointed out that "No Child Left Behind" was designed to encourage education in a number of fields, but notably NOT in Civics / Government / History or anything of that ilk...and as a result, quite a number of states have dropped studies in those areas from their graduation requirements. OH MY GOD! No wonder this is happening. The original rationale for Public Education was the maintenance of an adequately educated electorate...an electorate well enough educated to protect itself from tyrants. How can we have failed the Founders so completely? How can we have failed our posterity so thoroughly? How can we have so completely forgotten that the founding purpose of our form of government was to protect individual freedoms?