Alright...I confess. I've wished evil on a few people: The coach who wouldn't put my son in the basketball game in 10th grade. The guy who stole my parking space the night I was late for the ballet. The racist woman who hurt my young black friend's feelings while we stood in a roller coaster line at Six Flags. There may be a few more I'm forgetting, but I guarantee you I was muttering something like, "I hope you wake up with hives all over your body tomorrow," in the instances described above. And I'm pretty sure I ended the internally grumbled epithets with some hearty name-calling like, "Jerk!" So I hesitate to sit in judgment today - but I just can't resist a comment on this headline:
Former SBC officer prayed for abortion doctor’s death; now praying same for Obama
For the generally uninitiated, SBC is the acronym for the country's largest Protestant body, the Southern Baptist Convention. The SBC claims 16-million members in 42-thousand churches across the United States. There are many days I'm quite embarrassed to say I used to be one of those 16-million. Today would be one of those days. Wiley Drake is the pastor of First Southern Baptist Church in Buena Park, California. Three years ago, messengers to the annual national meeting of the SBC elected Wiley Drake Second Vice-President of the entire denomination. 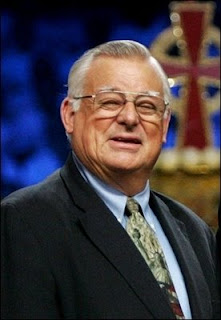 Reverend Wylie Drake
On Monday of this week, Reverend Drake told his Crusade Radio program listeners that he was glad George Tiller, a controversial abortion doctor in Kansas, was dead. Later that day, he explained to Fox Radio News host Alan Colmes that he had prayed for God to deal with George Tiller and consequently believed Tiller's murder at his Wichita, Kansas Lutheran church last Sunday morning was an answer to prayer. He continued by admitting that he's praying the same for President Obama. Reverend Drake calls his prayers "imprecatory prayers." He says they're biblical. I've been in church my entire adult life. I've studied the Bible and prayed with some of Christianity's most brilliant thinkers, proclaimers, and mystics. I had to look up the term "imprecatory" today. It's an adjective used to describe something that invokes evil curses. So an imprecatory prayer is one that implores God to do something cursed or evil to the subject of the prayer. I have to say, I don't care for the idea. Christians praying a hit list (Reverend Drake's terminology, not mine) sounds about as right to me as a radical Sunni extremist shouting, "God curse America." It seems altogether frightening and crazy...not to mention unholy. Whisper your wishes for hives or baldness or sudden weight gain when you feel you must. End the incantation with jerk or loser or idiot if it makes you feel better. Can we save "amen" for our petitions for compassion, justice, understanding, love... ...and peace?
Posted by mamadelapaz at 10:19 AM

I think perhaps the greatest challenge we face as humans is remembering that we are like them...that I am like him...no matter who them or him may be. Isn't that the basis of the Golden Rule?

It was so easy to think, upon hearing this story, "I would never...". But of course, I have...at least to the extent that God knows my heart and my heart is my prayer. Thanks for reminding me to think first about how I am like others and work first on the log in my own eye.