I logged onto my favorite flight tracking site early yesterday morning so I could keep an eye on the plane that was bringing six young musicians I know and love back to Texas after a three week tour of Europe.

My youngest son is one of those musicians.

I hit the refresh button no less than two dozen times during the day, and got so much pleasure out of seeing the little plane icon ooonch slowly across the world toward home.

We met the weary travelers at the Austin airport a little before midnight.  It was a happy reunion with hugs, celebrations of luggage/instrument arrival, quick stories about pizza box lids and the Fall colors of Germany...and then home to familiar showers and beds and facebook.

President Obama met a plane late last night, too.  At Dover Air Force Base in Delaware.  It was carrying 18 passengers - all in flag draped coffins - from Afghanistan. 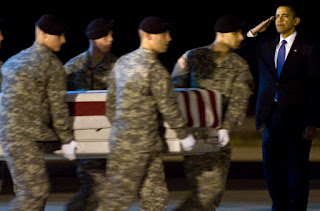 President Obama salutes the coffin of Sgt. Dale Griffin of Terre Haute, IN

The dead were this week's "fallen" in Operation Enduring Freedom, which has seen the biggest loss of US life this month since the war began in Afghanistan in 2002.  These troops and DEA agents died in two separate incidents on Monday of this week:  Ten in a helicopter crash, and 8 in a vehicle struck by an "improvised explosive device."

The families of these sons and daughters were at the air base to meet their loved ones' plane, too.  They had a few minutes with the President, who I imagine heard their stories, offered his condolences, his gratitude...and, perhaps, his promise.

His promise that as long as he is president, no more Americans who seize the opportunity to serve in this country will be sacrificed to an unclear purpose.  A promise that men and women of America who willingly give their talents to the service of our defense will no longer be left to wonder, "Why am I here?" or "What are we doing?"  A promise that he has paid attention to the resignation of US Foreign Service Officer Matthew P. Hoh, who wrote in his resignation letter:


(we are)...encouraging an ideology and system of government unknown and unwanted by its people

I crawled into bed last night just before 2 AM, knowing my son was safely home...looking forward to hearing his stories and seeing his pictures in the days to come.

President Obama landed on the White House lawn just before 5 AM this morning, knowing - I hope - that real people with real hopes and real dreams and loving families are sloshing through a quagmire that is in his hands to fix.

Peace.
Posted by mamadelapaz at 12:36 PM