On Wallpaper and War

This is the current state of my kitchen: 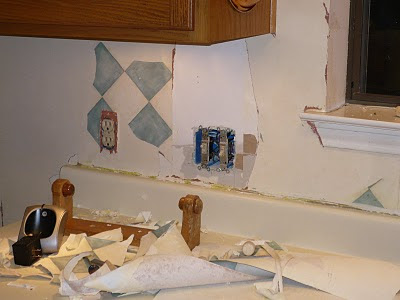 It started with a quarter-inch curl of wallpaper that was in my line of sight every time I stood at the sink.  Why I didn't think about glue before I started pulling, I'll never know.  Secretly, I suppose, I was sick of the wallpaper anyway.  But, now, three days into the wallpaper stripping project, I am cursing myself and asking a few critical questions that I wish I'd thought about before I reached for that nagging loose corner:
Forgive me if I trivialize the real disaster that is war.  I think about the world in the middle of more ease and luxury than I deserve.  But I believe I've found a common theme between my urge to pull on a piece of wallpaper and our country's urge to show the world who's boss.

Remember 2001?  The year the wallpaper of our national security began to curl right before our eyes?  It just seemed too lazy/passive/wimpy to glue the corner down and go on about our business, quietly planning a remodel when we could afford it.  We were probably tired of the old world order anyway.  So we started yanking at the layers of dictatorial, fanatical, radical regimes in the Middle East - and we created a mess that looks like this: 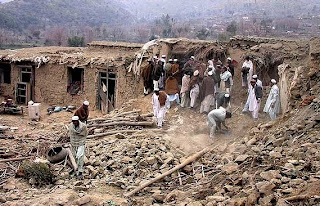 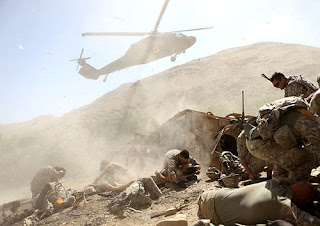 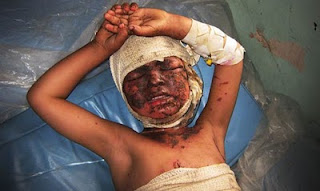 Here are the questions we've had to face in the midst of the "home improvement" project we call war(s):

And so I have adopted a new basic rule for life - a line that must not be crossed without thinking:


Never peel a loose corner of wallpaper.  Never start a war.
The resulting angst from either is probably more than we want, more than we planned for, and far more messy than we could have imagined.

So I peel.  And I regret the mess.  And I long for a quick and successful path to something beautiful and new.

I joined a new Facebook group yesterday.  It's called My Church Preaches Social Justice.  Because mine does.  And I'm not leaving it.  Even though Glenn Beck says I should.

In case you missed the instructive Beck broadcast session late last week, let me catch you up.  If you go to a church that has the term social justice or economic justice anywhere in its mission, curriculum, or Sunday sermon - you must leave the fellowship and report the pastor to church authorities.  Immediately.  Here's why:

the term "social justice" many Christian churches use to describe their efforts to address poverty and human rights, is a "code word" for communism and Nazism

That's what Glenn says.  I am not making this up.

I can't tell you what church service Glenn visited before drawing his conclusions.  Perhaps there are some communist/Nazi Christian churches out there just for the sake of amusing us all with the oxymoron-ness of their existence. But where I worship, social justice is code for:


In my church, social justice is code for not being satisfied with a resourced and self-focused kind of lifestyle that entitles me and mine to have more than you and yours...whether it's health care, or food, or a place to sleep at night that's free from the perils of war, or a right to love and be loved by the person I choose.

In the holy book I study, the very first people to gather in the name of the holy man we Christians try to emulate actually seemed to operate a bit like socialists.  Take a look at what was going on in the second chapter of the book of Acts (The Bible):

44All the believers were together and had everything in common. 45Selling their possessions and goods, they gave to anyone as he had need. 46Every day they continued to meet together in the temple courts. They broke bread in their homes and ate together with glad and sincere hearts, 47praising God and enjoying the favor of all the people.

What's that about, Glenn?

Take a look at yourself in the photo below, trying to scare church people into believing the very justice Jesus lived to proclaim is something evil and subversive. 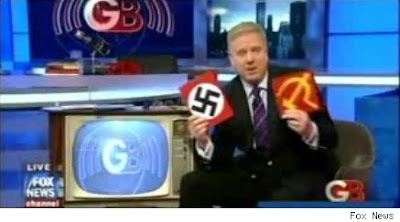 Funny.  That's exactly the spin the religious "right" put on Jesus' message in his day.  They had their own version of scare tactics and crazy talk to stir people into a frenzy.

What do you say, Glenn?  Nail that social justice nut up?

Peace.
Posted by mamadelapaz at 7:08 PM 2 comments: Links to this post