The Inalienable Right to Hate

I was absolutely going to stay out of the discussion about Fred Phelps and his band of relatives who call themselves Christian while they run all over the country carrying signs that read: Thank God for Dead Soldiers and God Hates Obama and Fags Die, God Laughs.

I do not like Fred Phelps.  I will borrow an evocative phrase my mother uses from time to time:  I wish God would just pinch his head off.

And so it didn't seem right for me to comment on the Supreme Court wrangling over the rights of Fred Phelps, et al. to crash a funeral for an Army Lance Corporal who died in Iraq in 2006.  Seems members of the Westboro Baptist Church in Topeka, Kansas stalk military funerals so they can see and be seen by people who might disagree with their ideas about Sin in America. Here's how the faithful followers of Rev. Phelps like to show up for these military services: 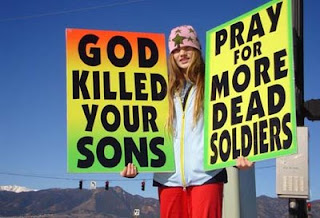 Freedom of speech is protected in this country - even if it's tasteless and cruel and full of lies and hate.

But then I saw this photo: 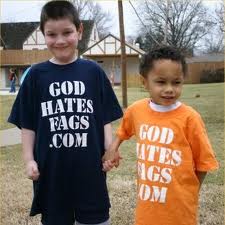 And now I really don't know what to say, except I'd like to find these children and tell them that the person who pulled these shirts over their heads and took their picture is wrong. I'd like to ask them what kind of house they live in...because if it's one in which God and Hate are used in the same sentence, I'm betting they've been horribly abused - if not physically, certainly emotionally.  I'd like to ask them if I could pick them up for ice cream this Friday night...

Because that's the night I'm asking God to pinch off some heads...

and I'm hoping they don't have to see that, too.

Sigh.
Posted by mamadelapaz at 8:57 PM