That's the fastest you can drive on the 88-square mile island of Martha's Vineyard.  I'm not kidding.

There are also no traffic lights.  And nothing but smooth and curvy two-lane roads.

For a girl from a bustling city in a state where wide roads and big cars rule - it was a bit of an adjustment.  But after a few days in my rented econo-box, I felt my pulse slow and my peripheral vision expand.  I was breathing, not fuming.  I was meandering not maniacally swerving.  I was catching a glimpse of the world outside my personal high-speed space. 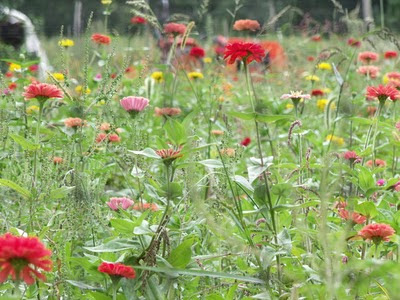 Behind a tall wire fence, in the bright light of noon, was a square-mile of this.  It was breathtaking.

The next day I decided I needed one or two more shots of Creation's Crayola box, this time taken in the longer shadows of an afternoon.  I drove the same road - even slower than 40 mph.  I drove it four times.

The flowers were not there.

The next morning, I took the same route.  I went 20 mph this time.  My field of Springtime in September had vanished.   I thought I'd lost my mind.

By the following day I realized the flowers had been harvested.  Every single stem had been cut to the ground.  I had seen those blooms just hours before they went from planted-in-the-earth to arranged-in-a-vase.

And I could not help wondering...what if I'd been going 60?

I ran across the photo, taken almost four months ago, this week as I rushed through the pile that was 2010 on my desk .  If digital images have a voice, this one was shouting:  Slow down!  I swear I actually heard it.

Meander a bit on the journey, it said.
Watch for beauty along the way.
Stop and take a picture or write a poem or whistle.

Or plan to miss a lot of what is good about this world.

Peace.
Posted by mamadelapaz at 4:40 PM