In honor of the original Peace Mama...
Mother's Day Proclamation
by Julia Ward Howe*, 1870
The First Mother's Day proclaimed in 1870 by Julia Ward Howe
was a passionate demand for disarmament and peace.
Arise, then, women of this day! Arise, all women who have hearts, whether your baptism be that of water or tears!
Say firmly: "We will not have great questions decided by irrelevant agencies. Our husbands shall not come to us, reeking with carnage, for caresses and applause. Our sons shall not be taken from us to unlearn all that we have taught them of charity, mercy and patience. We women of one country will be too tender of those of another to allow our sons to be trained to injure theirs."
From the bosom of the devastated earth, a voice goes up with our own. It says, "Disarm, Disarm!"
The sword of murder is not the balance of justice. Blood not wipe out dishonor, nor violence indicate possession. As men have often forsaken the plow and the anvil at the summons of war, let women now leave all that may be left of home for a great and earnest day of counsel. Let them meet first, as women, to bewail & commemorate the dead. Let them solemnly take counsel with each other as to the means whereby the great human family can live in peace, each bearing after his own time the sacred impress, not of Caesars but of God.
In the name of womanhood and of humanity, I earnestly ask that a general congress of women without limit of nationality may be appointed and held at some place deemed most convenient and at the earliest period consistent with its objects, to promote the alliance of the different nationalities, the amicable settlement of international questions, the great and general interests of peace.

Biography of Julia Ward Howe
US feminist, reformer, and writer Julia Ward Howe was born May 27, 1819 in New York City. She married Samuel Gridley Howe of Boston, a physician and social reformer. After the Civil War, she campaigned for women rights, anti-slavery, equality, and for world peace. She published several volumes of poetry, travel books, and a play. She became the first woman to be elected to the American Academy of Arts and Letters in 1908. She was an ardent antislavery activist who wrote the Battle Hymn of the Republic in 1862, sung to the tune of John Brown's Body. She wrote a biography in 1883 of Margaret Fuller, who was a prominent literary figure and a member of Ralph Waldo Emerson's Transcendentalists. She died in 1910.
Posted by mamadelapaz at 1:36 PM No comments:

It's an old Cat Stevens song, and I cried today when it came on the radio.

I have no idea, really, what Cat Stevens (aka Yusuf Islam) was writing about in the early 70s - but I know the dagger his words drove into my heart today...

My niece is studying in Jerusalem until mid-June.   Last weekend, while the eyes of the world turned happy/sad/congratulatory/angry toward the US for the killing of Osama bin Laden - this 20-year old world citizen was vacationing in Egypt with no awareness of the world news and no cell phone handy for her parents to contact her. 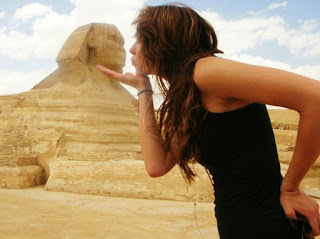 To say my sister had a sleepless night or two this week would be a gross understatement. Many of us want this brilliant and beautiful young woman to come home.  As soon as possible.

Of course she is resistant.  She doesn't feel in danger or threatened in any way.  She is treated with great respect, she reports - everywhere she goes.  I don't want to put words in her mouth, because I haven't spoken with her, but I don't think I'd be stretching the story by saying she has told her parents:

Certainly, there are countries that actually are unsafe for Americans to visit under the current political climate, such as Iraq, Sudan and Algiers. But other Middle Eastern countries, such as Egypt, Jordan, and Syria are completely safe, as well as extraordinary tourist destinations.

BUT there is no denying the US State Department has issued a Worldwide Travel Alert:

The U.S. Department of State alerts U.S. citizens traveling and residing abroad to the enhanced potential for anti-American violence given recent counter-terrorism activity in Pakistan.

And there's no avoiding the fact that a CBS reporter who was in Egypt in February to cover the celebratory occasion of regime change was brutally attacked  - after being dragged from a team of people who were paid to protect her.  (Don't watch Lara Logan's interview on 60 Minutes if you have a loved one in the Middle East.)

And I challenge you to find something encouraging to read on the State Department's travel information site specific to Israel:

U.S. citizens, including tourists, students, residents, and U.S. Government personnel, have been injured or killed by terrorists while in Israel, the West Bank, and Gaza. Attacks have occurred in highly frequented shopping and pedestrian areas and on public buses. American employees of the U.S. Embassy and Consulate General and their families are prohibited from using public buses and their associated terminals in Jerusalem, the West Bank, and Israel. (My niece is also prohibited - by her parents - from using buses since the March 23 bus stop bombing in Jerusalem).


I don't think I'm an alarmist.  I'm one of those people who believes if we plan our lives fearfully around the potential for danger, then terrorists win.  But I am a realist.  Sometimes it is best for Americans to lay low.  I think this might be one of those times.

Listen to Cat Stevens:  A lot of nice things turn bad out there.  Oh, baby baby....It's a wild world. 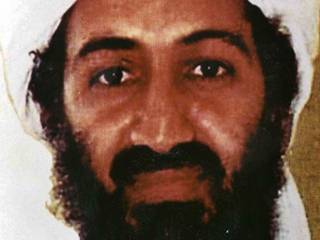 I am longing for a circle of wisdom tonight to help me sort through the questions that have distracted me all day.  I open the conversation with this...

Are we the good guys or the bad guys? 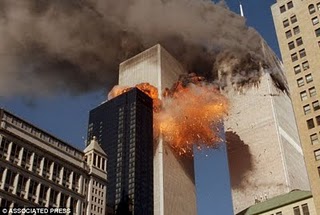 Are images of Americans cheering a political assassination something to be proud of as those photos fly from twitter to facebook to blog around the world? 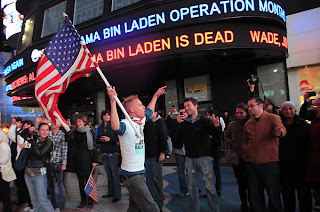 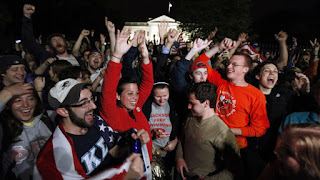 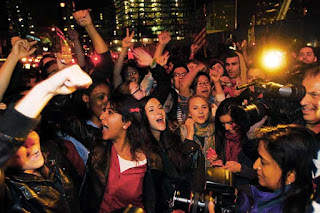 Are the Christians in this "Christian nation" wondering, like I am, what Jesus would do?  He is, after all, the reported author/Divine speaker of these words:


You have heard it said, 'an eye for an eye, and a tooth for a tooth.' But I say, do not resist an evil person! If someone slaps you on the right cheek, offer the other cheek also. If you are sued in court and your shirt is taken from you, give your coat, too. (Matt. 5:38-40)

Has anyone who declared today, "Justice has finally been served!" ever quoted Mahatma Gandhi?


An eye for an eye makes the whole world blind.

Is there a better way to fight evil in the world than shooting it in the head twice and dumping it in the sea? 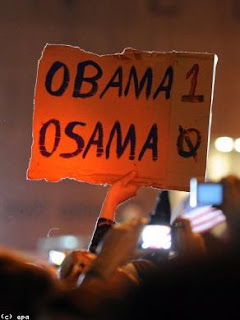 Here's what a pastor friend of mine in College Station put on his church's sign today:

HATE CANNOT DRIVE OUT HATE
ONLY LOVE CAN DO THAT
-Rev. Martin Luther King, Jr
And I'm wondering what that would look like in the real world...would Navy SEALS be involved?

Anyone?
Posted by mamadelapaz at 6:35 PM 4 comments: