(Warning: The image at the bottom of this post - from the London Times - is terrible.)

When you're an eleven year old boy, it seems the most you should have to think about is how to pass your final math exam or how many hours of practice it will take to consistently sink a basketball from the 3-point line. You should not have to think about how to survive a massacre in your home.

Have you heard this story? The one about Ali el-Sayid? He soaked himself in his 6 year old brother's blood last weekend, and managed to still his trembling body long enough to convince the 10+ murderers walking by flashlight through his home killing every living being that he was already dead.

It happened in Houla...a collection of poor farming villages and olive groves in Syria's central Homs province. More than 100 people were killed in the door-to-door bloodbath that began late Friday and continued into early Saturday. Many of the the victims were women and children - all of them were shot at close range or stabbed in their houses.

Six of them were the father, three brothers, sister, and mother of Ali el-Sayid.

There are many terms being tossed into news reports about the weekend massacre: shabiha, Alawite, pro-Assad regime, anti-Assad regime, Sunni Muslim, Shiite Islam. Strung together in sentence upon sentence, they have a mind-numbing, eye blurring effect on me.

But the mental image of a young boy rolling himself in his brother's blood and lying still while he listens to his family die - that blurs my vision because I am blinking back tears as I transfer the faces of all the young boys I have known and loved onto the scene, and it numbs my mind because I cannot let myself really believe it.

And little boys - sleeping in their own beds at home with their mother and father and sister and brothers - should not have to play dead in order to live. 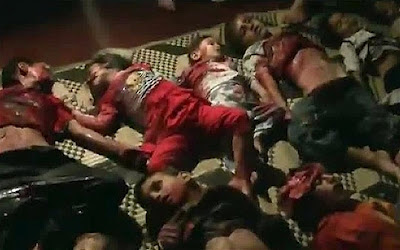 Here it is. How can we walk on with our thoughts on anything else?

Peace.
Posted by mamadelapaz at 11:12 AM