I stopped this morning to study this piece of life-sized sculpture on a sidewalk in Seattle. 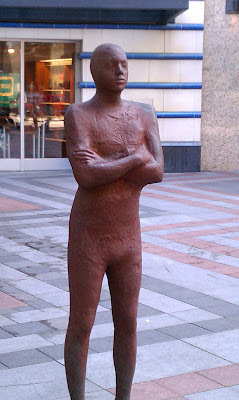 It was as if it had been placed in my path to reflect exactly what was going on inside me...the mirror to my soul today, you might say.  I was walking around with an anger hangover - that sickening, lingering feeling of frustration and self-pity that often comes after a complete communications breakdown with someone I need, desperately, to understand me.

Look at the bronze image again.  Arms crossed, face pinched, eyes closed.  Oh man...if that's not me when I feel like the Great Disregarded in a dialogue about differences I don't know what is. When I feel unheard, I am suddenly made of metal, have almost no heartbeat, and cannot factor in budging even an inch from my solid stand of self-righteousness.

Nothing very life giving ever comes from that statue of me.

Which brings me to the front page of my newspaper today. 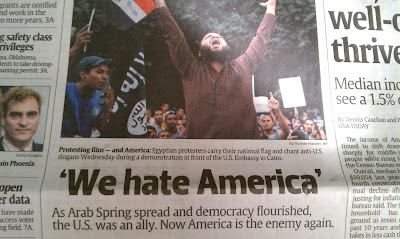 Below is a paragraph from the accompanying story about an Egyptian protester outside the US Embassy yesterday.  He was there, as were protesters in Libya whose uprising ended in the death of four Americans Tuesday night, because of the YouTube posting of a 12-minute trailer for a movie made by a California real estate broker that denigrated the prophet of Islam.

I see the US government allowed the web to spread this link all over the world without limiting freedom, without banning it," said Mohammad Umma, who like many in the crowd believes that because America is a democratic nation it should censor media that insult any religion.

"America tells us they are the country of freedom, democracy and tolerance," Umma said.  We considered America democratic, but now with what happened, we hate America."

I want to fly to Cairo and have coffee with Mr. Umma.  I want to tell him that Americans are, for the most part, quite tolerant, and believe in every person's right to express religious views openly and safely.  We have extremists just like Egypt-and Libya-does. That's what I want to say.

Then, I want to explain the concept of freedom of speech to Mr. Umma and his friends, and assure them all that our constitutional right to such freedom has been used mostly for good, not bad.

And I want to say that democratic does not mean perfect.  It does not rid our country of kooks or haters of a bazillion kinds.  It does not even always mean every US citizen receives fair and equal treatment inside our own borders.

But here's what I'm thinking I'd be talking to.  That statue.

His arms are crossed.
His face is pinched.
His eyes are closed.
I imagine he would not budge to have a cup of coffee with me.

And this, my friends...at the most basic level...is how long days of silence and separation and loneliness and all out human misery begin.

It is also how war begins.

Chris Stevens was the US Ambassador to Libya who was killed Tuesday night at the US consulate in Behghazi...the building he opened with a ribbon cutting just three weeks ago. He said this about his work as a diplomat:

Put down the arms.

...the ones you have folded in front of you.

Posted by mamadelapaz at 8:10 PM