Okay. I won't hide today. I won't throw you a tender piece about my growing children, or wax on about the lovely locally grown produce in my fridge, or jump across continents and oceans to Syria to ponder a revolution in trouble.  I'll sit right here and say it:  Our guy did not shine last night.

He was given opportunity upon opportunity to lean onto his elbows, look across the gap that was designated-debate-space and say, "Really?" or "Are you kidding me?" or "Bullshit!"  Instead he smiled and scanned his notes, which I am imagining had big highlighted red letters that said: DON'T REACT or STAY CALM or DON'T SWING AT THOSE PITCHES. 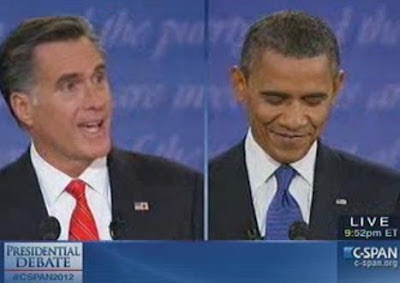 Which, of course, didn't make it much of a ballgame.

It was not a runaway game, to say the least...but Governor Romney definitely managed some base hits.  And he threw at least one of his curve ball zingers across the plate:

Couldn't the President have managed a simple back atcha! on that one?

(My other fave was, I have five sons, so I'm used to dealing with liars. Oh. My. Awful.)

I console myself today with yesterday when we were all saying: It is Obama's to lose...All he has to do is not mess up.

He did not mess up.  He didn't stutter or swear or sweat.  He didn't insult Christians or Muslims or his own children.

What he did do was miss closing the game with a fastball thrown undeniably in the strike zone.

I'm not much of a baseball fan, but I am an American.  I know the meaning of a full count in the bottom of the 9th with a runner on 3rd ready to head for home plate and extra innings.

My team's pitcher walked the batter last night. What we have today is an extra inning.

Romney kept his team in the game, somehow...and that's just the truth.

So, President Obama, have no fear.  We have not left the ballfield.  We're still here cheering you on and we'll stay for as many innings as you play.  But please don't miss the ump's next call your direction...

Peace.
Posted by mamadelapaz at 10:56 AM