From the Statesman Archives


BYLINE:    JAN COOK CHAPMAN
DATE: October 11, 1995
PUBLICATION: Austin American-Statesman
PAGE: A13
COLUMN: JAN COOK CHAPMAN
It was 1964 in Nashville, Tenn., when I first encountered the hatred of racism. I was 11 years old. My mother asked me to call a restaurant to find out whether ``they served colored people.'' Our housekeeper had worked late, and mother wanted to take her out to dinner.
``Yeah, we serve 'em,'' was the bitter answer. ``We have to. It's the law.'' I knew by the tone in the man's voice that our beloved housekeeper would be served but would not be welcome in his restaurant. We did not take her to dinner that night. I thought we were cowards. I thought good people should stand toe to toe with that kind of hatred and not be intimidated. I thought that for 30 years. In fact, until recently I honestly believed that good people had wrestled the ugly beast of racism to the ground. I have been ignorant.
Two weeks ago my white-skinned 8-year-old son and his dark-skinned 14-year-old friend were riding their bicycles on our suburban Williamson County street. They were three houses from our front door when a sheriff's patrol car made a dramatic U-turn in the middle of the street and cut them off. Seconds later another patrol car arrived with an officer who bounded out of the vehicle and fired questions at these two young boys.
``Where have you been? What is your name? Where do you live? How old are you?''
After a brief radio exchange with another officer, these authorities got back into their patrol cars and took off. No explanation given ... no apology. Just two shaken children left standing on a corner with a neighborhood of wondering onlookers.
When a sheriff's deputy responded to my irate and incensed call for explanation later that evening, he said there had been a house burglary in the neighborhood and that the boys looked like their suspects. An 8-year-old on his bicycle in broad daylight three houses from home looks like a burglary suspect?
Only because of the color of his companion's skin. (photo below of those criminal looking boys)
We have spent years teaching our children that police officers are to be respected, that police officers are our helpers and our friends. In one brief encounter my 8-year-old learned something new: Police officers are bullies. The incident also opened the door for our 14-year-old friend to talk about many similar encounters with the police. Apparently, young black children are used to this kind of treatment.
In the Austin American-Statesman, Austin police officers said they believed Mark Fuhrman's racism would unfairly paint officers nationwide. And I wonder, is it an unfair picture? Does skin color have absolutely no bearing on the reactions of police officers in this city? Nationwide?
In relating my son's experience to an African American friend, a professional black woman, my eyes were opened even wider to our racist, authoritarian system. She asked, ``Did you actually speak to the police officer with that tone in your voice?''
I assured her I had, that I had let the officer know I was extremely upset throughout our conversation, and that I thought his treatment of the children was horribly out of line.
She told me she would never have spoken to a police officer that way. That, if she had, she believed she would have been treated like a criminal, too. When she said that, I realized that the deputy's first question to me when he telephoned me that evening was, ``Which boy was your boy?''
So I say to us all, wake up! We are not the enlightened society we think we are. We have not pushed racism into some extremist's camp. We are still looking at people as us and them, good and bad, innocent and suspicious simply because of skin color. Our African American brothers and sisters have not been allowed to ``get over it.'' Racism is alive and well in every corner of their lives.
Most of us have changed our language. We are not as hideous as Mark Fuhrman. But it appears to me that many of us have the same dark hearts that 30 long years ago bitterly said, ``Yeah, we serve 'em. We have to it's the law." 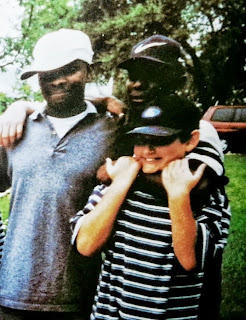 My 8 year old and his friends Chaze & Charmus.
Posted by mamadelapaz at 3:06 PM

Blessed are those, like you, who write, who think, who ponder justice and love in the USA in such a thoughtful and Christ like manner. Jesus was a dark skinned young man. Zimmerman said on Hannity's show that killing the young Trayvon Martin was God's Will? Really?!

We are made in God's Image, in the Image of Love. Yet we keep making God like us. Sad.

I am depressed. I remember the bathrooms, the doctors' offices, the water fountains. Why must we make others small?

A young man lies dead with the blessings of the Florida courts because he was black and walking in his father's neighborhood. We should all feel dirty and ashamed.

"Blessed are the peacemakers,
for they will be called children of God." Matthew 5:7

Thanks for your thoughtful words. They make me feel better.