The basic math of our state of redness today is blowing my mind.

On October 19 - not even one month ago - we were toasting our efforts at signing up a record number of voters in the Lone Star State. 15.8 million, to be exact. The Secretary of State's office took an extra week of data entry time to get everyone loaded up. Hooray! We will be voting the change we want to see in the country on November 6, that's what we were dreaming.Wax up those flag-blue surf boards...the wave was a'comin' to Texas!! Beto O'Rourke was standing in the middle of the Red Sea, on the verge of an Election Day miracle. 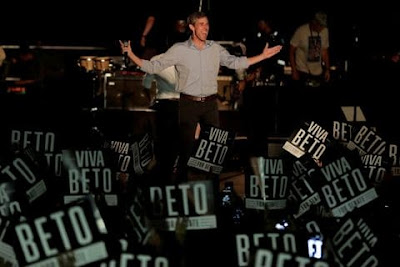 You know how many of those registered Texans voted? 8.3 million. 52%
52%...Let it sink in.
That means 7.5 million of the celebrated, ready-to-vote registrants didn't get the message:

But they didn't.
Not yesterday.
Not on one of the 11 days of early voting.
Just. Not. At. All.

In my blue-dot TX neighborhood (Travis/Williamson counties), 249,000 registered voters didn't bother to go to the polls. That coulda won it.

Our biggest county in Texas...Harris (Houston), had no trouble showing up wearing blue last night, but...C'MON PEOPLE...826,000 registered voters in Harris county DID NOT VOTE. Just a quarter of you could have delivered the miracle for Texas.

Even in Beto's home county of El Paso, 200,000 registered voters didn't vote yesterday. If you were one of them, I hope you don't mention it to your Abuelita.

It makes no sense to me. I love to vote. Even though I live in a state where my candidate rarely wins a race, I LOVE TO VOTE. It makes me feel lucky and free and, well, weirdly important.

Try it, Texans...you'll like it.
And until 2020, ponder this cartoon by the talented, Pulitzer prize winning Nick Anderson. See if you find yourself in the majority. If you do, then comethehellon. Vote next time. Your vote is your voice. It makes a difference. 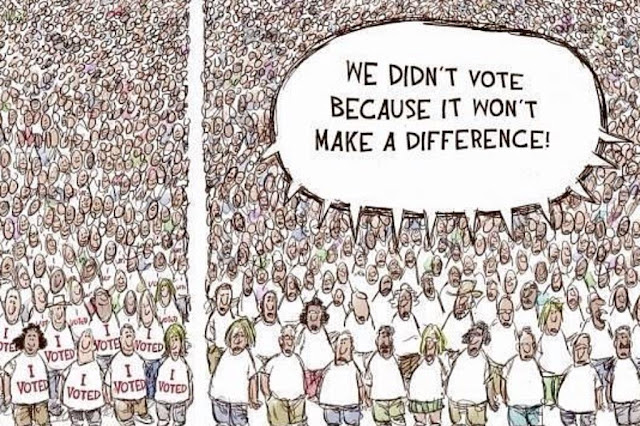 Posted by mamadelapaz at 4:43 PM