54 years ago this week, Martin Luther King, Jr. asked everyone in America who cared about justice to join him in Selma, Alabama. I was 9 years old.

The plea from Dr. King came after 600 non-violent voting rights marchers were stopped by Alabama state troopers at the end of the Edmund Pettus bridge as they walked toward Montgomery, 54 miles away. The protesters were tear-gassed and billy-clubbed and beaten back in their tracks (Bloody Sunday). A second march was scheduled three days later. In that brief re-grouping period, King appeared on TV, and he begged America to join the movement:

I don't remember any of that from my 9th year of life in Nashville, Tennessee...but it hit me hard when I saw the scene depicted in the movie Selma a few years ago. I wondered then, "Why didn't we go to Selma?"

I am here now. 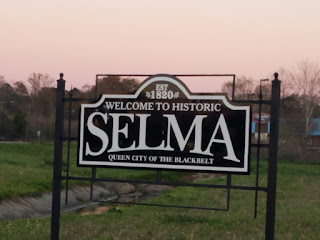 It's a twelve hour drive from Austin, TX to Selma, AL. We left our neighborhood at sunrise this morning and arrived just as the light hung low enough in the sky to add a touch of lovely to the front porch of the historic home where we're spending the night. 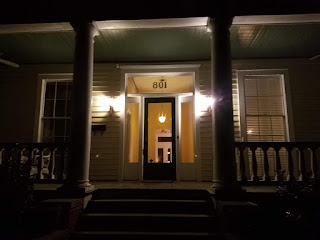 We'd been listening to the book White Rage on our drive across East Texas, Louisiana, Mississippi, Alabama...so as we meandered through Selma this evening, every historical marker in front of every 1860s home looked like a giant, neon RACIST sign to me. Pity our poor host, who greeted us warmly at the door of his 1870s home, but spoke in that Alabama drawling way that reminded me, again, of people from the past I'd really like to forget. Let's say I may have shown up on his porch a little hyper-sensitive to the ancestral sins of the South.

Tomorrow we begin our self-styled/self-guided civil rights tour in earnest. The Pettus bridge is Stop #1. But tonight, we sat a bit with our gracious Southern host and heard about his hopes for his hometown of Selma, about his love for his grandmother, and about the valiantly struggling cookie business he runs in honor of both.

Trip lesson #1: You just can't judge a person by their drawl. Or the color of their skin.

From the road to Montgomery. Peace.

Posted by mamadelapaz at 8:13 AM