You Don't Know Me

I am not a communist because I believe Black lives matter.

That's what I'd like to say to the dude who threateningly revved his big truck's engine in front of my house this afternoon and screamed, "COMMUNIST!" out his window before he sped away. I assume what he meant to say was...

This, we have come to assume in the months since we installed it on the front lawn, is what draws this kind of ire and name-calling several times a week from angry drive-by bellowers: 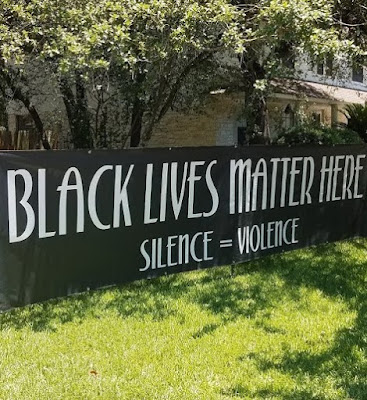 It's a big sign. We understand that. It's been in front of our house since mid-June, so - you know - it's become a bit of a thorn in some folks' craw. Puking nastiness into the street might be considered natural under such circumstances. (If these folks were chickens* and our sign was pebble stuck in the chickens' necks.)
Yes. We believe people are entitled to their opinions about a large sign on a suburban lawn. We also believe we are entitled to have it there.

I would love to tell everyone who wonders about the sign exactly what has shaped our lives and brought two old white people to a point of needing to make an unmissable statement on their lawn. Perhaps the driver-side screamers would like to know how many other folks have stopped by to thank us, offer a small gift of appreciation or word of solidarity, sometimes even to tell us how how much safer the sign makes them feel in the mostly white suburbs of Austin, TX.

A conversation would be great.

But we've learned a solid lesson since mid-June - *these blowhards are cowards. They don't stop to talk or ask a question or even to voice neighborly dissatisfaction with our 16' x 4' lawn decor. Instead they work behind our backs on petitions that go nowhere, mention us in disparaging ways on their neighborhood blogs, and use their crowd-dispersal sirens at 2 AM in front of our house.

They drive by, yell something stupid out their windows, and speed away like we're chasing them with guns instead of standing with great urgency next to a sign about loving.

Nope. Believing Black lives matter does not make me a communist anymore than not believing that truth makes you a Trumper. I could probably assume you are one, though, since the pick up truck that followed behind you this afternoon had a giant TRUMP 2020 flag flying from the tailgate.

Yeah. You better bring back up when you drive by the BLM banner crazies. Because, um....

Peace. Let it be.

Posted by mamadelapaz at 3:53 PM No comments:

A Letter to All Editors

Dear ABC/NBC/CBS/CNN and all Beltway journalists,

We know your days have been difficult since Donald Trump moved into the White House. You have been maligned, both personally and collectively. It has often been terrifying, and always tiresome to watch.  So, thank you. For standing in the Blustery Bully’s path day after day to show America how poorly the DC experiment in swamp draining was going, you deserve a long tropical vacation. At least. I know the jangle of Trumpling Bros Circus is coming ‘round the bend toward you.  Plug your ears. Rest.

I pray you’ll take the time to consider how desperately Americans want you to walk faaaar away from the Boy who implores us to believe there is a Wolf in the woods who’s going to eat us all. The kid in school who somehow never got suspended for pulling the fire alarm every other day during Mrs. Martin’s very relevant Civics class. Yep. We were standing on the lawn instead of learning about the three branches of government. Thanks, kid.

I’m asking, no begging – let the circus come and go. It will never, ever leave if you paste photos all over our towns heralding the Magical Mystery of Snake Oil politics. Let The Man and his Minions stew in their sour juices at the edge of Power Town. Make them call you. Ignore their calls.

And if you’re really rested up – how about an apology?

It’s been a blissful few short weeks of calling the proverbial spade a lie in real time in your publications/on your broadcasts. Just six days since you actually left the Mugging Maniac standing with limited living room range in the White House briefing room. Finally. FINALLY!

We did not deserve the pile of manure you shoveled onto our driveways, into our entertainment centers, across our hearts and minds for 4+ years. We really didn’t. We grew up in a world where it was okay to listen to you. But in these long, long years since the Beast was let out of his cage, we’ve bobbed up and down across a sea of insanity. We're water-logged. Breathing is labored. Skin is shriveled. Our lingering spirits feel almost nothing but malaise. At the very moment we KNOW we need to rally, we can't.

We just can’t take it anymore.

The Lying King needs an audience. Stop. Giving. Him. One.

Posted by mamadelapaz at 7:57 PM No comments: