I think as little as I possibly can about the state of our union.
About the dirty-handedness of politics.
About Donald J. Trump.

Eliminating the SOTU address from my prime time lineup next week is a non-event. I would not watch. I'm betting plenty of Americans believe they already know the state of the union. It's not great. The grandstanding, political pandering, and theater of the house-divided that is Congress is not necessary. We should be freed to watch our regularly scheduled programs. Thank you, Madam Speaker.

I watch episodes of House of Cards to relax. (That's right. I'd rather sit with the bone-chilling/creepoid Doug Stamper than the stomach-turning/ethics-churning orange face of reality.) At least I can walk away from HofC believing it's all fiction, and that the murderous-lapdog-to-an-evil-president is really just a nice actor named Michael Kelly who probably loves puppies and his mother. 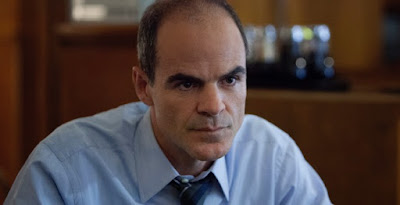 My husband argues that this is no time for good, compassionate thinkers to turn away from the pile up of stupidity, egotism, ass-kissing, and lies that seems to define the real world in Washington, DC. The hubs says ignoring the problem is not going to solve it. He reminds me that Darkness cannot drive out darkness; only light can do that. Hate cannot drive out hate; only love can do that. He wants me to get back to work, telling stories of real people struggling in real time.

But I am mired in grief and despair, humiliation and disgust, anger and indignation. No light. No love.

I make my case regularly:  If every major newspaper, TV network, and online commentator would go to a ZDT  (Zero Donald Trump) policy, I wouldn't have to look away. The man is only in this for the attention, you know. People with EQs of a 3-year old are like that. (Apologies to the delightful 3-year olds I've known. Your attention stealing antics were adorable!) As a nation, we can't conquer a contradictory, chaotic reign of calamity by giving it air time. It simply feeds the Beast.

Trumpian philosophy is not new to me. The President has torn a page from the playbook of a long-deceased TX state representative I used to work for. This was his motto: "It doesn't matter if they say good things or bad things about you, as long as they're talking about you." (RIP R.B. McAlister)

As long as they're talking about you...let it sink in.

So, how 'bout that ZDT policy? As a former journalist, I'm a devoted fan of the First Amendment. No one believes as strongly in the necessity of a free press to a thriving democracy as I do. But how free could it possibly feel to spread the Trump Tantrum/Bully Brand day in/day out? Ugh.

I'm not advocating leaving the manchild completely unattended/unchecked while he terrorizes us all with tweets and tantrums and twits, but he has to slip below the fold, after the commercial break, into some kind of ho-hum space in the news cycle.

Nancy Pelosi is more than a political mastermind who could outsmart any of us on any day (before her first cup of coffee). She's the mother of 5 children. I suspect she knows exactly what to do with a misbehaving 3 year old: Tell him he can't have what he wants until he settles down, follows the rules, plays well with others.

Until then, she knows, the best thing to do is send the kid to his room.

For the love of humanity, (and the effectiveness of this parenting move), let's NOT let his pout/rant/name-calling/door kicking get our attention while he's in time out. #ZDT 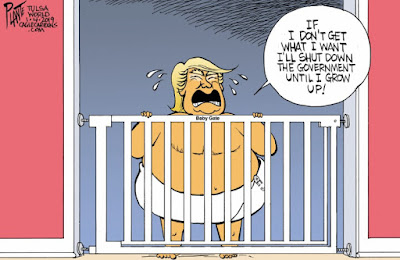 Maybe we'll have room in the house for some light and love if we ignore the noise from the back room for a bit.

Posted by mamadelapaz at 5:10 PM No comments: