If you need a 6 letter word that means A vassal's sworn loyalty to a lord, you probably already know it.
Same with that 8 letter word for Plausible, but actually wrong.
Or that fancy 11 letter word that means Deserving or causing public disgrace or shame.
Pencils ready puzzlers! If you didn't already know, I speak of:
FEALTY
SPECIOUS
IGNOMINIOUS
These words fall onto the growing list of adjectives we've heard/read/repeated many times since the 2020 presidential election was called for Joseph R. Biden on November 7. They fall under the heading SAT Words around my house, and are keeping good company with some others that have been in heavy rotation for the last 60+ days:
SEDITION conduct or speech inciting people to rebel against the authority of a state
EGREGIOUS outstandingly bad; shocking
SPURIOUS false, fake, illegitimate, invalid
Bring it on Will Shortz!
Everything above this sentence was written a week ago. The beginning of a light-hearted piece to prove the last four years in the USA haven't left us completely fallow. Written before a worked up mob of insurrectionists flooded the steps of our nation's Capitol building and then breached our not-very-well guarded House of Democracy, terrorizing everyone legitimately occupying the place. Both lawmaker and law enforcer.
The words those looters, rioters, and killers carried through police barricades, broken windows, and shattered doors last Wednesday were less erudite than SAT words, to be sure, but they are no less complicated words that turn my stomach when I hear them/read them/and swear never to repeat them:
TAKING NAMES AND KICKING ASS: Alabama Congressman Mo Brooks
TRIAL BY COMBAT: President's attorney Rudy Giuliani
WE'RE COMING FOR YOU: President's son, Donald Trump, Jr.
Hold my beer a second, please, while I say something very much on my mind:
WORDS FUCKING MATTER.
Donald J. Trump stands to become the first president in US History to be impeached twice. If it happens, the hammer on that nail will be his words to the rallied and reckless last week. Rudy Giuliani may lose his license to practice law for his incendiary rant. Congressman Brooks faces censure this week in the House of Representatives for the words he now says were simply: A pep talk after the derriere kicking conservatives suffered in the dismal 2020 elections.
Our words matter.
I've certainly found myself searching for good words in the days since Election 2020 was declared for Joe Biden. The results were polarizing. We and Them became such comfortable pronouns in our conversations that most of us never even stopped to ask the question, Does this happen every time a party loses an election? (The answer is, apparently...yes.)
The difference this election cycle seems to be the way pre- and post-election words were tossed around with egregious and irresponsible abandon from the most regularly featured newsmakers/tweeters in the Land.
Which brings us to last Wednesday.
And the days since last Wednesday.
I have read and said so many damn words since January 6, I honestly have begun to imagine I'm disintegrating from the inside out. I hit a plateau over the weekend. There had been a backyard campfire and s'mores with my favorite 6 year-old. Then snow. Snow! In Central Texas. The visitation of soul aching was at some ease. I managed to catch a deep breath. Or two.
Then these words entered Stage Heart-Middle:
DEMONRATS a reference to Democrats
BLM THUGS Black Lives Matter protesters
PEDO-JOE a reference to the President-Elect (from the view of Q****, I suppose?)
These choice tidbits arrived in an email from a man who stood with me and my husband when we were married. A man my husband has known since before either of them could drive a car. A man who could not bear the fact of a Pulitzer Prize winning writer's piece (aka NYT BULLSHIT) being sent by my husband to a group of lifelong friends. To say it's a difficult email to read doesn't begin to describe the spin the words contained therein have had me in since Sunday evening.
WORDS FUCKING MATTER, Friend. We have delivered none to your inbox to linger in the heart the way yours will. Especially the last 23 of them. They will stay long beyond the current political ignominy:
DON'T BOTHER RESPONDING. MY TRUE FRIENDS AND I ARE BUSY SEEING WHAT WE CAN DO TO SALVAGE THE CONSTITUTION AND THE COUNTRY.
And then: ADIOS.
Just like that.
Words - emailed words - throw the House of Friendship right on top of this smoldering Pile of Chaos that is forgotten civility among citizens, friends, neighbors, family. Does it all end up looking like this?

I'm a fan of words. I like the big ones, the colorful ones and especially the ones that deliver the clearest message in the simplest way.
But ADIOS? To a friend of 50 years? Over political sensibilities that don't align?
It's - well - for lack of a fancier word - TRAGIC. 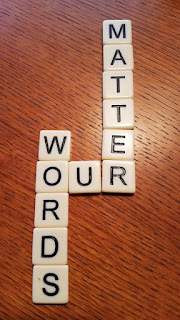 Peace.
Posted by mamadelapaz at 5:27 PM No comments:

As our big yard sign comes down, we want to say THANK YOU.

On June 9 of 2020, we installed a simple message on our Dallas Drive lawn that we believed needed to be seen big and heard loud and clear: BLACK LIVES MATTER HERE.

In the weeks and months since the sign went up, we have been encouraged by so many of you - walking, waving, honking, stopping your cars - expressing gratitude for the message. We have been delighted by your impromptu driveway visits, your unexpected gifts, and most importantly, by your stories. Some of you stopped to say, I feel much safer here now. Others have said, Yes. This is the neighborhood we want to be. From our place of privilege and safety, we could not have anticipated the breadth or authenticity of these responses. Thank you for teaching us.

Several drivers made slow passes by the sign to shout something that always sounded angry to us. Those few sign-objectors probably could not imagine how such outrage would clarify for us the importance of continuing the call for long-overdue justice.

We have not changed our minds about the urgency of this message. The issues that compelled us to install the big sign are most certainly not resolved. But crisis and protest have given way to the everyday reality of injustice and inequality. The work each of us must do is not over, but perhaps the time for our big sign is. We hope the days ahead give us no fresh reason to put it up.

You can count on us to stand steadfastly by the words Silence = Violence, and more importantly, to stand with you as we move our communities toward justice.

Thank you for revealing the balance of goodness in this neighborhood and in our world. We are proud to live among you.

Posted by mamadelapaz at 4:15 PM No comments: